As our next production edges ever closer (have you got your tickets?!) it’s time for the return of a very special member of the TSP family – our costume lady, Stephen!  Stephen has been tasked with no fewer than five full-cast costume changes and sixteen individual characters to dress for My Big Fat Crazy Musical so he’s certainly got his work cut out.

I’m the self-elected costumery person for TSP and my job is to make you look good.  Well, actually, FABULOUS!

When you see a stage production, it’s rare that you really think about all the insane running around the cast do behind the scenes – and let me tell you, it can be a bit hairy at times (and I’m not talking about the abundant armpits!).

When you join a musical theatre group, one of the things you don’t get told straight away is that you need to leave your dignity at the door.  Think (almost) Full Monty.  Backstage is teeming with partially naked cast members, frantically trying to swap microphones and change one sequinned shirt for another.  You get used to it very quickly because everyone is in the same boat.  And the hazards!  Many a time I’ve been hit by a flying bra or a pinging cuff-link.

Part of the job of the costume person (traditionally a seamstress) is to make, buy, borrow, hire or indeed sometimes accidentally steal.  I need to think about each individual character and their personality while also considering the ensemble as whole to make sure all the costumes flow and compliment one another.  I always think of costume design as a bit of a contract between me and the cast member.  I’ll make sure you look as good as possible and you do your best to bring the outfit to life and look amazing on stage!  (Even if potentially dressed as a 7ft bear, or a giant bunny rabbit…those certainly are some of my favourites!)

I personally like to break with the tradition of “seamstress and sewing machine” and I’m often frantically running round most nights with a hot glue gun or a steamer.  This has led to some fun experiences with sequins and fairy lights.  I remember making a sequined stretchy, PINK denim jacket for our very own Dolly Parton in a previous musical.   It had flashing LED lights embedded in it and was one of the most ridiculous things ever to grace a hanger, but when you saw it on stage – wow!

Out with a Bang

We have a huge costume store, going back decades, and a very good relationship with June, who runs “That Looks Good” – a hire agency.  I also tend to buy a lot of stuff from Alibaba.com (China) that will only make it through one show but looks great on stage.  There’s a bit of a joke among TSP that one spark would set off a fiery explosion of polyester…but it certainly is a lot of fun. 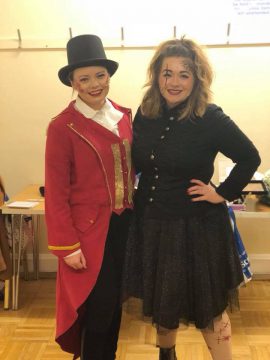 If you’re thinking of joining a theatre group in Glasgow and are worried about your body shape and size – don’t!   I can tell you with absolute certainty I can find a costume that is going to make you look great on stage and feel fabulous at the same time!

Click HERE to find out more about My Big Fat Crazy Musical and follow the link to get your tickets today!